Georgia and its dangerous neighbours 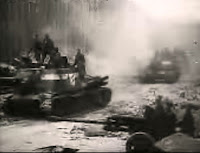 Just have a look to following pictures and put then timely on order... Berlin (1945), Prague (1968) and Georgia (2008). Very little has changed in russian military strategy: we are accustomed to a far away war in Afghanistan, where soldiers have clear engagement rules, where the Coalition Forces are put on the Press if there are civilian losses, where friends fire has a meaning.
For Russia all these words have no meaning, we are talking with an imperial power that has nothing to justify or explain against world.
Perhaps we should be aware of it.
Soldier are executing orders, nobody is claiming against the type of weapons that are used, whether based on depleded uranium, or whether the are using smart bombs like the good old "Stalin's organs" that are not selective on civilians.
Europe wake up, if commercial interest are jeopardised.
Georgia is not harmful, they are an exception in the east russian panorama especially because an "independent" pipeline is running there.
Georgia must be punished because they are too close to West and they are somehow relevant to wetern economy. According to russian public opinion, Georgia is responsible for war (just have a look to Pravda ) .
Anyway, all this can show us that during a public event (Bejing 2008 Olympics) somebody (Russia) can decide, despite the "good" co-operation with Nato, to support with tanks their interest somewhere else.
Before European union decides which attitude to keep with him, we have a new status quo.
Europe hasn't learnt anything, Russian has learnt also the fair politician words: we are there and we are ready to send a peace keeping force!
Ukraina, Poland and neighbour countries are advised.
Pubblicato da AD1958 alle 18:13