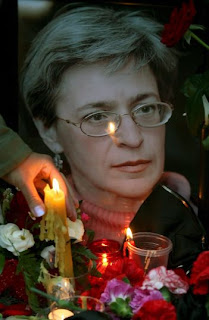 ...in Russia.
Shurpaev, Gaji Abashilov, Anna Politkovskaia, Paul Khlebnikov have something in common: they were journalist and are dead. The first two were killed misteriously in Russia: they were active in reporting information on Daghestan and Chechenya. Shurpaev known himself to be in a dangerous position and declared himself as dissident. Just to honour him and to broaden iùhis voice his blog link is included. http://shurpaev.livejournal.com/
It's a barbarian usage killing people, but very effective. We in Europe are used to discussion and democracy, and we try to avoid extreme solutions. In other parts of the world is easier: just kill and people will be warned and forget the disappointing opinion.
We should be aware that not everybody speaks the same language of us and that is unwise to talk politely with a public criminal.
Perhaps, we talk politely only because we are already afraid of him.
Pubblicato da AD1958 alle 20:42