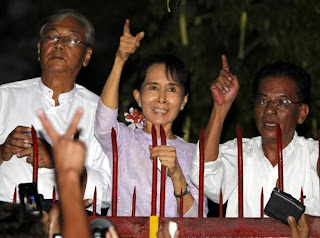 "Non bisogna perdere la speranza per un mondo migliore"
This blog was born three years ago, my friend Amenda knows that, during the monks turmoil in Rangoon. Lot of things happened, many were killed and arrested, the junta is still there, flooding and typhoon destroyed a part of Burma.
Nothing has happened: none of the western countries managed effectively to do something for Burma, which remains strongly influenced by the dangerous China Regime.
Now is the time and the silence resistance of Aung San Suu Kyi shows that dreams are possible.
I have never fogot Burma: long live Burma!
Pubblicato da AD1958 alle 16:27